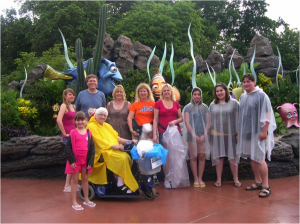 My mom is an amputee. The scooter from Scooter Vacations was there (Summer Bay Resorts on U.S. Highway 192 in Clermont, a bit west of Walt Disney World) in a room off from the check-in lobby and my mom took it for a test drive over to our unit.

Several Days into their vacation…

We didn’t feel like putting up with the buses so we went by car. Today we headed for Epcot. My mom’s scooter was taken apart and we were able to get it in the car. I was worried if it would work after we put it back together, but it ran fine.

After dinner my sister Ann called and said they were at the America Gardens. We headed down when my mom said she felt the scooter riding rough and stopped. I had her come toward me so I could see what the matter was when we heard two loud POP, POP! The right rear tire was almost completely off the rim!

The outer tire quickly came off and the scooter ran on the rim without difficulty. The car was not far away so we headed back to the resort. 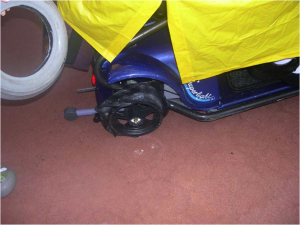 “I called Scooter Vacations around 9 PM not expecting an answer and figuring the next day would be a lost cause – Not So.”

I called Scooter Vacations around 9 PM not expecting an answer and figuring the next day would be a lost cause – Not So. A friendly representative answered the phone and was very helpful, and apologetic. He said that next time call them right away and they will get to you to help no matter where you are in the parks! He asked when we would need a replacement and I said we usually start out by 8 AM. Scooter Vacations had the replacement there by 7:30 AM the next day!  Great customer service – I highly recommend renting from them.

Checked out of Summer Bay Resorts and into the Pop Century Resort, rented scooter from a “Disney Preferred” scooter rental company and on the first full day…

We slept in a bit since we planned for a long day ending with the fireworks at the Magic Kingdom. Ann had to help the scooter go up a hill. I looked at it with it on but not moving and the battery read in the green so I thought it was OK. We headed for Mickey’s PhilharMagic and the scooter would only go slowly. When you turned it on the battery indicator was in the green, but when you pressed the accelerator it would drop into the red zone. I had to push the scooter to assist it.

After the next attraction…

The scooter wasn’t going anywhere. I called the company, Buena Vista Scooter Rentals and I told them of the problem. Their representative stated that the Revo only holds a charge for 6 to ten hours (ours was going after 5). He offered no help, no replacement, nothing. He said we should have taken the charger with us. We were stuck with what we had. Fearing we would get stuck in the park we headed out. We had to leave and miss the fire works and the rest of the day at the Kingdom. My mom was very disappointed. I pushed the scooter back to the front of the park. We made it back to the bus stop and to the room, with me pushing the scooter all the way.

*Excerpts from Bochnik.com.  Click here to read the full trip report or go to their website to read about their many Disney and Birding Trips.