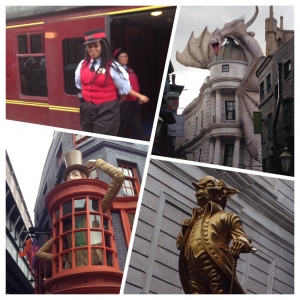 The summer crowds and crazed Harry Potter Fans are starting to thin (although there were plenty of Potter wanna-be’s running around yesterday), so we finally got to check out the new Diagon Alley.  We started at Islands of Adventure and then took the Hogsmeade Express over to Universal to Diagon Alley.  They have a good system for handling mobility scooter transportation.

Diagon Alley was amazing (once we found it).  Being regulars we did not have a park map and Diagon Alley is not marked, so we walked right by looking for it.  It is the brick walled area next to the train station.  I guess they are trying to replicate the “hidden” magic factor.  Once an employee told us where to go you do get the true “WOW” factor once you walk through the unmarked brick entrance.

We took a few pictures and walked around.  We did go into the “bank” where the animatronic/robotic character responds to you by looking you in the eye!  He had quite the stern warning when my son told him this was a robbery! He looked soooo real!

If you would like a more detailed review of Diagon Alley our friends at Mice Chat have a great podcast dedicated to it that they just released.  Click here for it: Mice Chat Diagon Alley Podcast.